Uncovering the Hidden Cost of Gender Biases in Lending to Women

Unconscious or not, gender biases leave millions of women on the sidelines of financial inclusion, and millions of dollars in foregone profits for banks on the table. Reducing gender bias in lending is key as the pandemic recedes, so that women-led businesses help to propel the recovery.
Irani Arraiz
María Paula Gerardino
Jimena Serrano
Patricia Yañez-Pagans
MARCH 30 2022

If you are a woman entrepreneur, you are likely paying a higher interest rate for your business loan, you were approved for a smaller amount, or were offered a shorter tenor than your male counterparts. In fact, just by being a woman, you are more likely to get rejected for a business loan or, if your application is accepted, the collateral requirements will probably be more stringent.

When we talk to banks in Latin America and the Caribbean (LAC) about these disparities, the first claim we usually hear is: “We are gender agnostic in our credit assessment process”. But being agnostic to gender in no way solves one of the highest, often hidden barriers women face in accessing credit: gender biases.

Gender biases (conscious or not) are part of human nature, borne out of cultural and social norms that assign certain roles to men and women. In turn, these intangible notions impact women in very tangible ways when it comes to access to credit and economic opportunities. For example, a study of the Chilean consumer credit market found that women were 18% less likely to get their loan applications approved, even when their applications were identical to those of men. Evidence of gender discrimination in access to credit has also been found in Turkey and Italy.

For banks, there is a clear business case for seeing women as an equal business opportunity as men. After all, by continuing to reject applications from women and offering them proportionally smaller loans, banks are leaving money on the table. But how prevalent are these biases and how high is their potential opportunity cost?

To raise awareness about this issue in LAC, IDB Invest and the IDB developed an online tool to measure the impact of gender biases in credit offers. The tool measures both the implicit and explicit gender biases of bank personnel and the likelihood that these biases will affect their behavior. It also presents participants with hypothetical loan applicant cases (based on real cases that bank personnel see daily), which shed light on how their gender biases can negatively affect the credit offers they make to women-owned businesses.

We have partnered with several clients in the region to help them identify if gender biases are playing a role in credit decision-making and quantify the impact of these decisions on their bottom line.

So far, more than 500 credit officers and other bank personnel have used the online tool in different countries. We have found that 98% of participants exhibit some level of gender bias (full disclosure: so do we, based on our results from filling out the survey). Both men and women exhibit bias, and through the hypothetical cases included in the tool, we found that 88% of bank personnel gave worse offers to female clients (in terms of amount, interest rate, or tenor). If the hypothetical cases were real, 56% of the female applicants evaluated would have received an unfair offer compared to their male peers with worse credit profiles and less profitable, but otherwise similar, businesses. If biases played no role in credit decision-making, that percentage would have been zero. 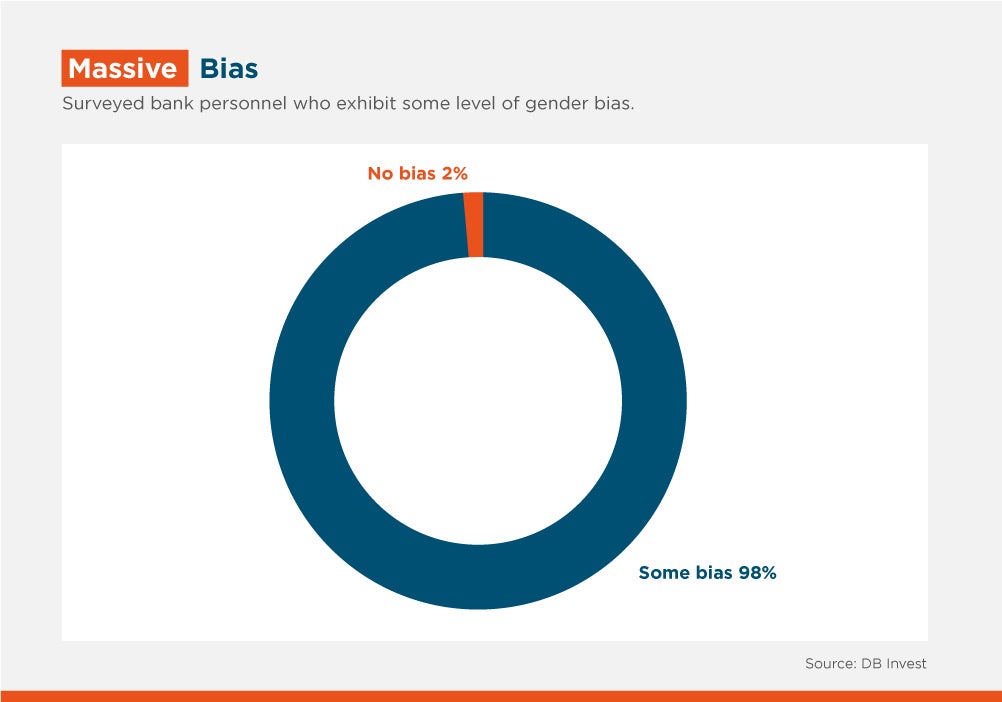 To verify these results, we also analyze the bank’s real data. We find that the real data backs the results observed in the hypothetical cases. Businesses with otherwise similar risk profiles and characteristics (sales, economic sector, region, etc.) that are owned by women consistently get worse loan terms and conditions versus their male peers. Women applicants are also rejected more often and end up using less attractive credit products (for example, they have more credit card debt and fewer working capital loans). Nonetheless, the data shows that women repay at least as well (or better) than their comparable male counterparts.

Clearly, gender biases are leading to lost opportunities for women to grow their businesses and contribute on an equal footing to the economy. The opportunity cost for banks is also real. In the cases we have analyzed, we have estimated millions of dollars in foregone profits (equivalent to around 8% of the financial income generated by these portfolios).

Uncovering the hidden cost of gender bias is a powerful argument to encourage banks to take action. Some of our partner banks have developed action plans to reduce gender bias, including by disaggregating data by gender in loan monitoring dashboards, setting goals for managers and loan officers, and modifying loan application interfaces to make relevant information more readily visible to officers. As we continue working with banks in the region, we hope to generate further evidence on the effectiveness of these approaches.

Authors are listed in alphabetical order. Patricia Yañez-Pagans from IDB Invest also co-authored this blog and was a core part of the team that developed the gender biases tool.

Patricia Yañez-Pagans is a Lead Economist in the Development Effectiveness Division (DVF) of IDB Invest, where she oversees the ex-post ev