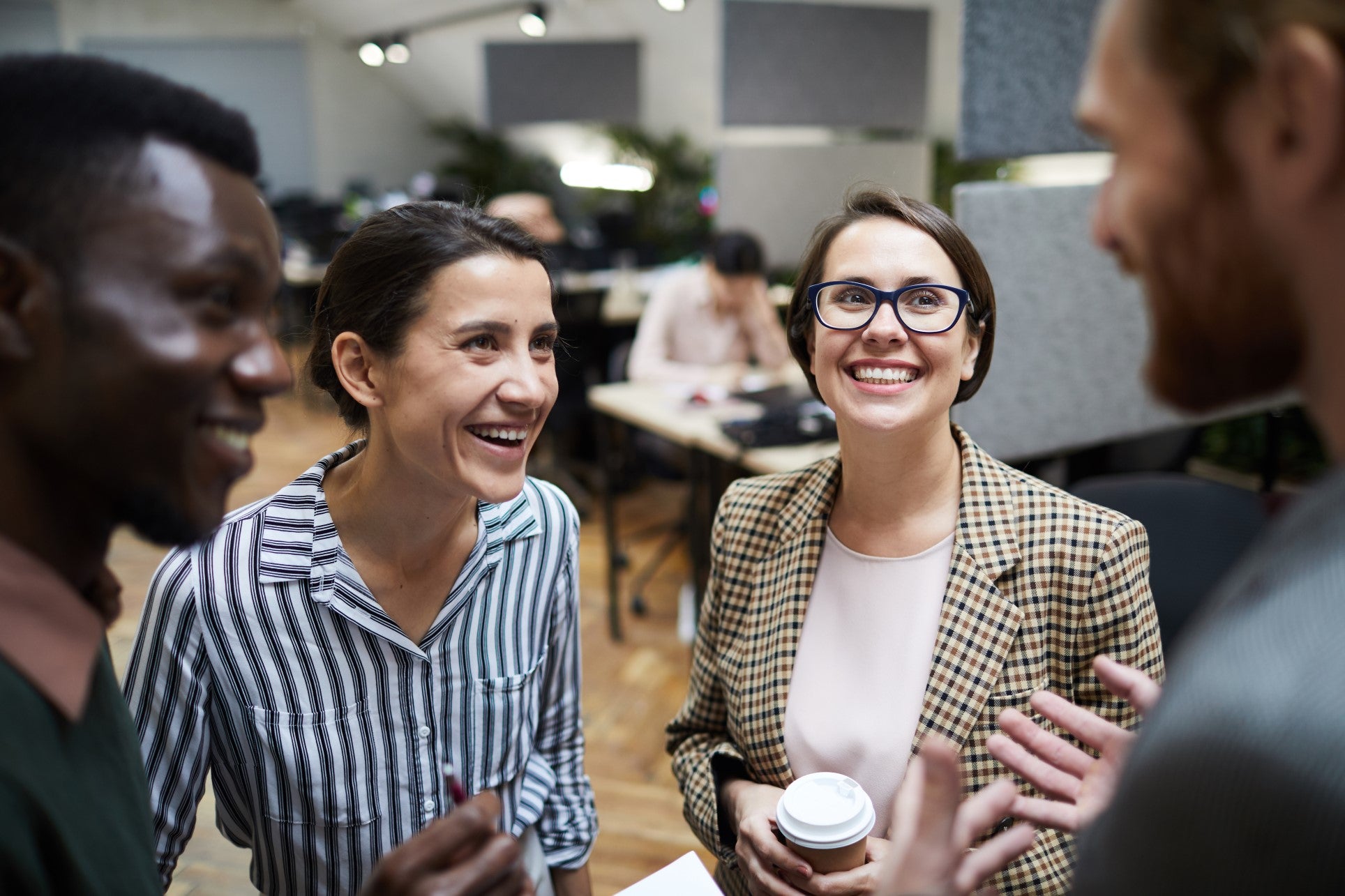 How Can the Private Sector Contribute to Gender Issues in Bolivia?

The private sector can help strengthen the recent progress of the Plurinational State of Bolivia on gender issues, as well as complementing the government's efforts for post-pandemic economic recovery and the role of women both in labor participation and through the enterprises they lead.
Julia Johannsen
Juan G. Flores
OCTOBER 04 2022

Bolivia has recently made significant progress on gender issues, such as becoming one of the 25 countries with legislation on gender identity or expression as of 2020. In addition, we cannot forget that its constitution incorporates the values and principles of gender equity and specific rights for women.

The 2021-2025 Economic and Social Development Plan seeks to leverage the existing regulatory framework to ensure a greater educational attainment for Bolivian women and a greater participation in labor activity and political leadership, in addition to designing mechanisms to promote formal employment and reduce both gender-based violence and employment gaps. The private sector could be a valuable contributor in this regard.

Companies have the capacity to contribute to the creation of quality employment focused on women, the design and provision of adequate financing alternatives for entrepreneurs, and the facilitation of their access to markets.

Local female entrepreneurship is growing and the country is well-positioned in comparison to the rest Latin America and the Caribbean in terms of women's access to financial services. Nevertheless, certain critical challenges persist and others have worsened due to the pandemic and its effects. Among others, there is still a large wage gap between men and women, female labor participation has fallen sharply in the last couple of years (mainly informal and SME workers), and gender-based violence continues to erode development potential; according to ECLAC, Bolivia has the highest femicide rate in South America.

A higher economic empowerment of women could trigger considerable developmental effects, as well as reduce levels of gender-based violence. According to the World Economic Forum, in Bolivia there is a negative relationship between the average income of an occupation and the level of female participation. Only 30.1% of senior professionals are women, compared to the regional average of 40.7%, and although 41.6% of companies have a majority of female shareholders, only 26.3% of them have women in senior management positions. Moreover, Bolivia's similar income-from-work equity gap is one of the largest in the world (ranked 125 out of 146 countries). 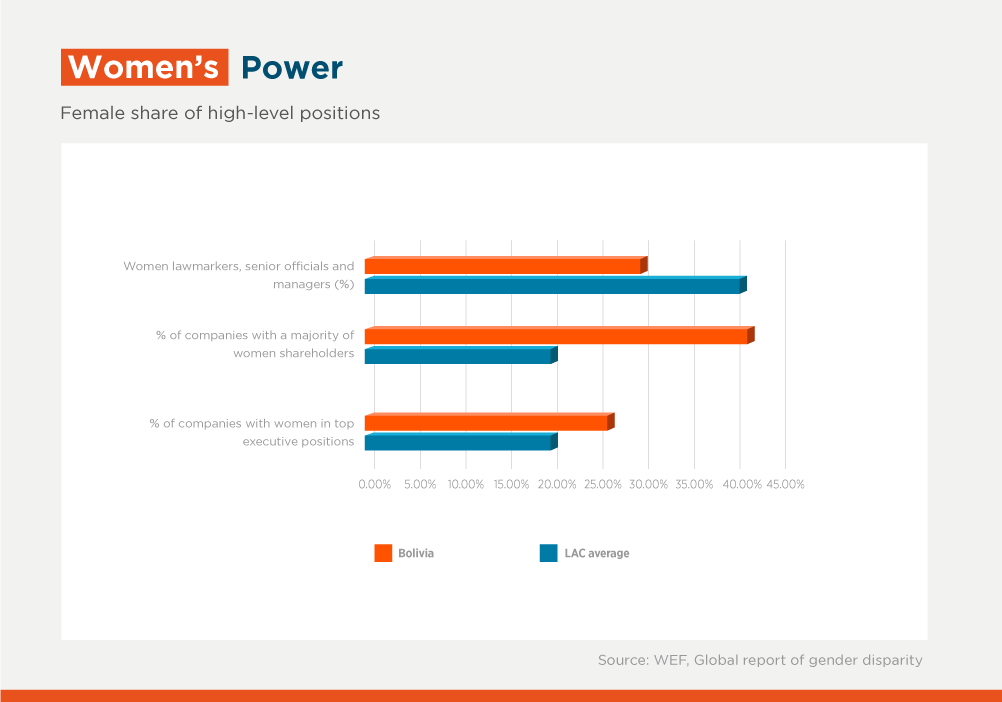 On the other hand, the private sector is encouraged to actively support women's entrepreneurship, its formalization, and its access to adequate financing. Solutions can be designed in the form of collaboration platforms (including incubators, accelerators, technology companies, universities, among others) and financing providers. Based on a recent survey, the factors driving the growing female entrepreneurship in Bolivia include: Economic independence (30.6%), family/enterprise balance (29%), and personal achievement (20.4%), while the biggest challenges facing female entrepreneurs are: lack of financial training, complexity of tax regulation, and difficulties in accessing a business and expanding commercial networks.

On average, 63.1% of women's enterprises are informal, 44.4% are in the service sector, 69.1% have been financed with their own resources (only 9.9% have had access to credit from a financial institution), and 42.9% include technology. In terms of training, companies need to deploy strategies for acquiring new skills and improving competencies to mitigate the undesired effects of automation, as, according to a study by IDB, UNESCO, and OECD, 30% of Bolivian women face a high risk of displacement because their jobs can be automated (compared to 10% of men).

The recently approved The IDB Group's Country Strategy with Bolivia 2022-2025 seeks to support gender equity issues, which are one of its cross-cutting axes for all the pillars and areas of action. In addition, IDB Invest is strongly committed to gender parity and the design and implementation of market solutions, with a cross-cutting approach, for companies to advance this agenda.

In this direction, collaborative efforts at the private level could also incorporate both the update of educational programs, so that the offer is adapted to the new demand requirements and the "jobs of tomorrow", and the promotion of the participation of women in Science, Technology, Engineering, and Mathematics careers, in which they are notably underrepresented: according to UN Women, the percentage of female researchers in Bolivia went from almost 63% of the total in 2010 to less than 38% in 2014, and the percentage of those working in engineering and technology was barely 19% in 2017.

From the perspective of private financing, alternatives could be explored for local financial institutions to expand the coverage of services to women (particularly in rural areas), women-led enterprises, and other diverse groups. Access to credit can increase companies' productivity, especially for MSMEs, which in Bolivia account for 99.5% of the business demographics and whose productivity is only 36% of that of large companies.

In this regard, IDB Invest recently granted US$35 million in financing to Banco FIE S.A. to boost Bolivian MSMEs, including women-led or women-owned enterprises. The transaction has a high development impact and is highly replicable (click here for details).

The current situation presents valuable opportunities for the Bolivian private sector to recover from the operational and financial difficulties it is currently facing, while effectively contributing to women's personal and professional growth, reducing the wide socioeconomic gaps they face, and complementing the government's efforts in this area.

Julia Johannsen is a Representative of the IDB Group in Bolivia, she has a Ph.D. and a Master's degree in Agricultural Economics from the University o

Juan G. Flores is a Strategy, Planning and Innovation Officer at IDB-Invest’s Strategy and Development Department where he analyzes challenges and opp