Amid the Pandemic, Governments and Multilateral Development Banks Must Continue Supporting Financial Institutions

Governments and multilateral development banks in Latin America & the Caribbean are playing a critical role in supporting financial institutions amid the pandemic, but must be ready to up the ante as the ultimate effects of the lockdown measures become evident in the financial sector, especially key microfinance institutions
Marcelo Paz
Terence Gallagher
NOVEMBER 20 2020

As the COVID-19 outbreak wreaks havoc across Latin America and the Caribbean (LAC), many countries are implementing targeted policies to increase liquidity for financial institutions and maintain the flow of credit for businesses and households. That may be critical in stopping the current crisis from spreading to the financial sector.

As we discussed in a previous post, LAC financial institutions are, in general, more resilient than they were during the 2008-09 Global Financial crisis, and have a wider reach. Struggling households and businesses affected by strict lockdowns were supported by the right policy mix, which often includes mandated forbearance measures and temporary moratoriums on loans that provided them with some financial breathing space.

Most of these measures were originally in place for three months; however, many were extended through a second round of restructurings that postponed payments for an additional three months and, in some jurisdictions, up to two years. Though these payment extensions come with some regulatory privileges that help financial institutions lower their capital consumption and provision requirements, the quality of the restructured loans could potentially deteriorate in the future, increasing non-performing loans (NPL) and weakening their balance sheets. 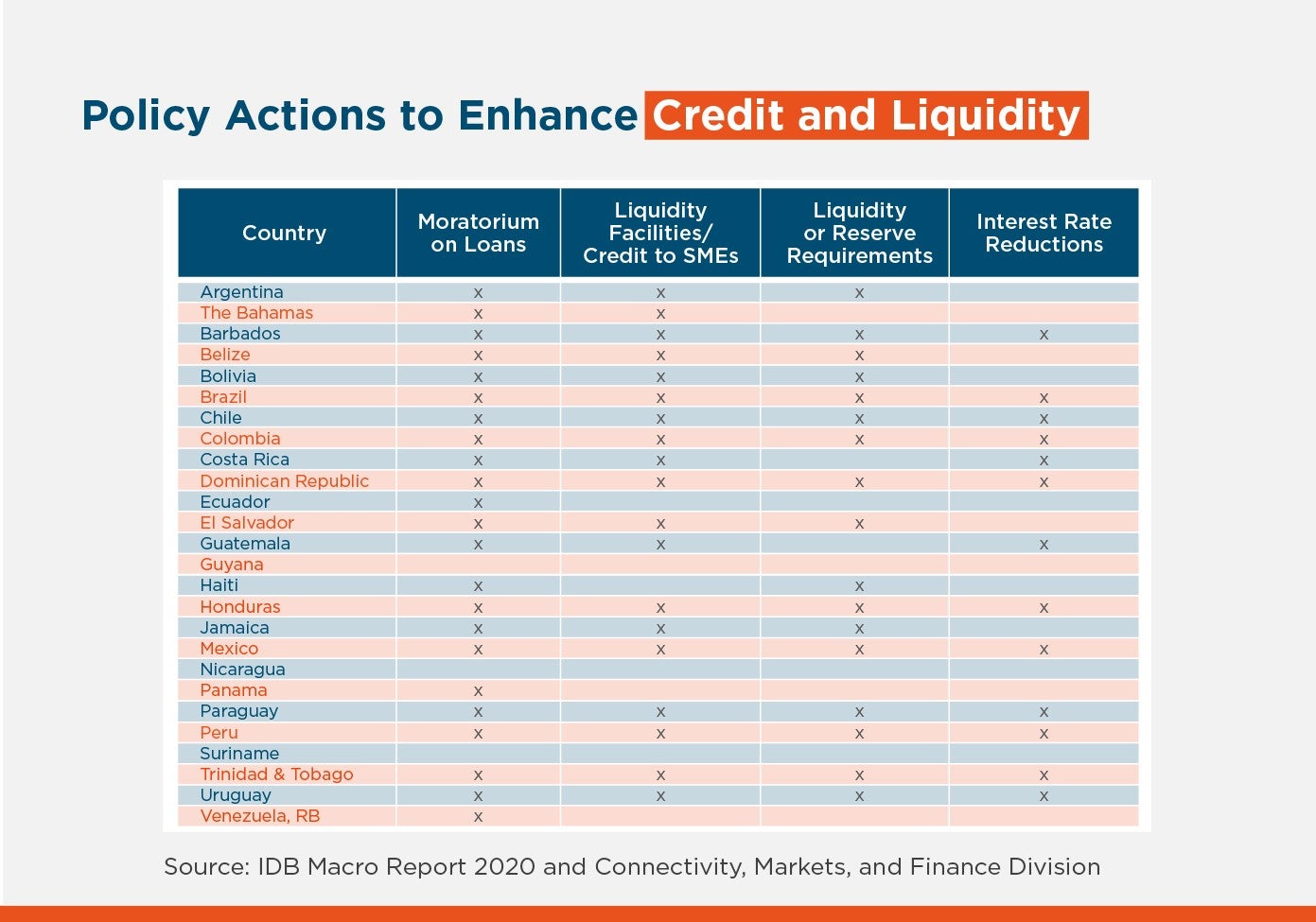 The results so far are encouraging, as banks have been able to maintain stability, which limits the potential for systemic risk. However, financial soundness indicators for the second quarter of 2020 illustrate some of the expected impact of the pandemic.

Data for Mexico, Chile, Colombia, Peru, Panama, Ecuador, and Guatemala show a 17% increase in loan-loss provisions in June 2020 with respect to the 2015-2019 average, as banks prepare their balance sheets in anticipation for loan portfolio deterioration. As loan-provision expenses surged, profitability fell almost 30%, with average return on assets and return on equity standing at 1.1% and 10.1% respectively.

Forbearance, loan restructuring, and flexible accounting procedures are keeping NPL and capital adequacy stable for now, at 2.4% and 14.7% respectively. And, as was expected given the widespread lockdown measures, lending activity has been suppressed. The average portfolio growth in the second quarter of 2020 was just 0.4%. 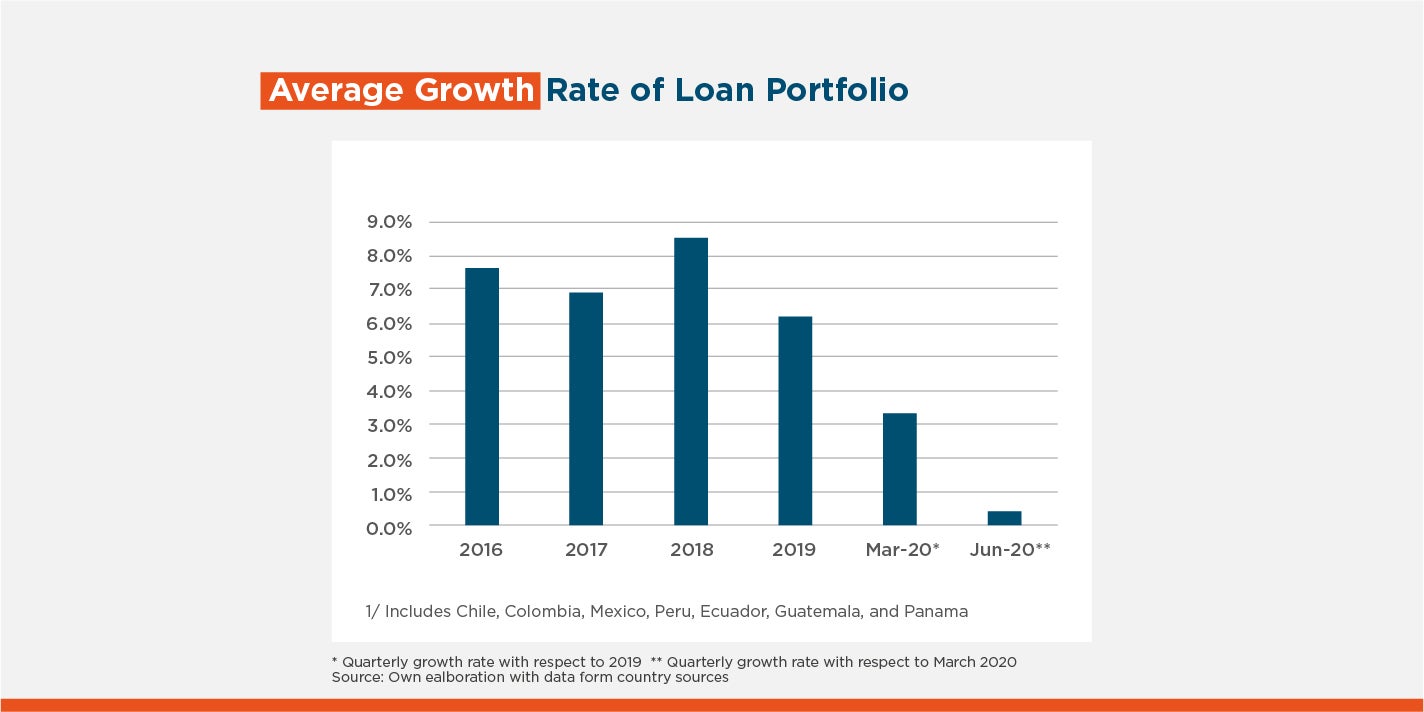 This situation, however, is having a greater impact on microfinance institutions (MFIs), which are in general more vulnerable than commercial banks. A survey carried out by the Consultative Group to Assist the Poor (CGAP,  a global partnership of more than 30 leading development organizations) shows that, as of April 2020, two-thirds of MFIs surveyed decreased lending by more than half to preserve liquidity, negatively impacting the low-income communities they serve while hindering financial inclusion efforts.

Moreover, MFIs are exposed to refinancing risk due to their significant reliance on institutional funding, and investors have become more risk averse. CGAP expects that 25% of MFIs globally could face liquidity problems if they are unable to secure refinancing as their funding operations come due; though data for MFIs in the LAC region is not as severe. The average term granted by MFIs on rescheduled loans was three months at the beginning of the pandemic, and current rescheduling efforts see many loans tenors extended for a further six to 18 months. As such, the full impact of the crisis will only become apparent over the course of 2021.

If the crisis extends and the return to normalcy is further delayed, some financial institutions could potentially face solvency risk, as companies are forced to shut down and households default on their loans. This could push banks and MFIs into survival mode, further restricting credit, which would exacerbate the economic downturn.

Financial institutions have a fiduciary responsibility toward their depositors and other stakeholders to preserve the integrity of their balance sheets, and therefore will most likely err on the side of caution in these adverse circumstances. To mitigate this risk, government-sponsored loan guarantee schemes are essential as they allow financial institutions to keep up the flow of credit, which will be critical to reactivate economies around the region. Argentina, Chile, Colombia, Costa Rica, Honduras, Peru and Uruguay have implemented such guarantee mechanisms with varying conditions and coverage limits, designed to encourage banks to continue lending.

It is important that these types of incentives continue to be implemented across the region, as guarantees will allow financial institutions to leverage the amount of government support with limited resources committed upfront. However, caution will be required to prevent misuse of blanket government support in favor of nonviable borrowers.

The role of public banks in this crisis is also  relevant. The possibility of seamlessly implementing public policy through these institutions makes them a vital channel for rapid deployment of resources to sectors where there is more need, such as MSMEs and other vulnerable segments of the population. Several countries are already using their government-owned financial institutions to implement multiple programs. In parallel, private commercial banks and MFIs are well positioned to scale up government sponsored initiatives to deal with the crisis, given their greater capillarity and wider geographical foodprint.

Regulation, supervision, and compliance has improved over the years, as more stringent Basel recommendations have been implemented over time. However, the scope of this crisis is unprecedented, and is yet to be fully felt in loan portfolios. The duration of the crisis, and capacity of FIs to support a return to growth in 2021 will be critical to determining how the next phase plays out.

Although most MFIs are not considered systematically important, a large proportion of the vulnerable population in the region depends upon their services; therefore, it is vital to ensure their survival and sustainability, and their continued role in financial inclusion. The World Economic Outlook published by the IMF points to a slow recovery ahead for LAC, with a 3.6% GDP growth rate in 2021. This, coupled with a so-far-resilient financial system, should place FIs in a position to support the economic recovery in the region.

Marcelo Paz is a Bolivian national who joined the IDB Group in 2008. He is currently a lead strategy officer, specialized in development diagnosis of