Financial Institutions Are Withstanding the Crisis, but Uncertainty About the Future Persists

Financial systems in Latin America & the Caribbean are performing well in times of COVID-19, and are better prepared for the crisis than ever; however, this doesn't mean that they are immune, and a protracted downturn may test their resilience
Marcelo Paz
Terence Gallagher
NOVEMBER 16 2020

The COVID-19 outbreak has brought major health challenges to the entire world, while crippling economies. Lockdown measures have caused massive unemployment and disruption of value chains, generating combined demand and supply shocks. Have we endured the worst of the crisis?

Consider financial institutions: they sit at the epicenter of this storm, and the interconnectedness of financial services in every aspect of economic life exacerbates the probability of a systemic crisis that could amplify the economic downturn with devastating consequences for the Latin American and Caribbean (LAC) region and the world.

Financial markets in many LAC countries are also being harmed by their degree of reliance on international financial markets. Economies that are dependent on cross-border capital markets are exposed to reduced credit availability, as international institutional investors take refuge in low-risk investments and widen credit spreads, which reduces access to funding. LAC countries have experienced short-term capital outflows of approximately $20 billion between December 2019 and March 2020 – almost twice the outflow registered during the 2008-09 Global Financial Crisis.

The longer the containment measures halt economic activity, the quicker financial institutions’ capital, provisions, and liquidity buffers will be depleted, increasing the possibility of a potential credit crunch. The high level of indebtedness of the private sector (households and non-financial corporations) worsens this situation. Between 2008 and 2018, private non-financial corporate debt in 10 key LAC economies – Argentina, Brazil, Chile, Colombia, Costa Rica, El Salvador, Honduras, Mexico, Nicaragua, and Peru – increased from 29% to 36% of total combined GDP, and household debt expanded from 19% to 25% in the same period.

The good news is that financial systems in LAC countries performed quite well in 2008-09, avoiding financial collapse and supporting the region’s swift economic recovery; and, more than a decade later, they are, in general, more resilient than they were, and have expanded considerably: domestic credit to the private sector in the main LAC economies has expanded between 2008 and 2019 by more than $1 trillion, to $2.7 trillion. 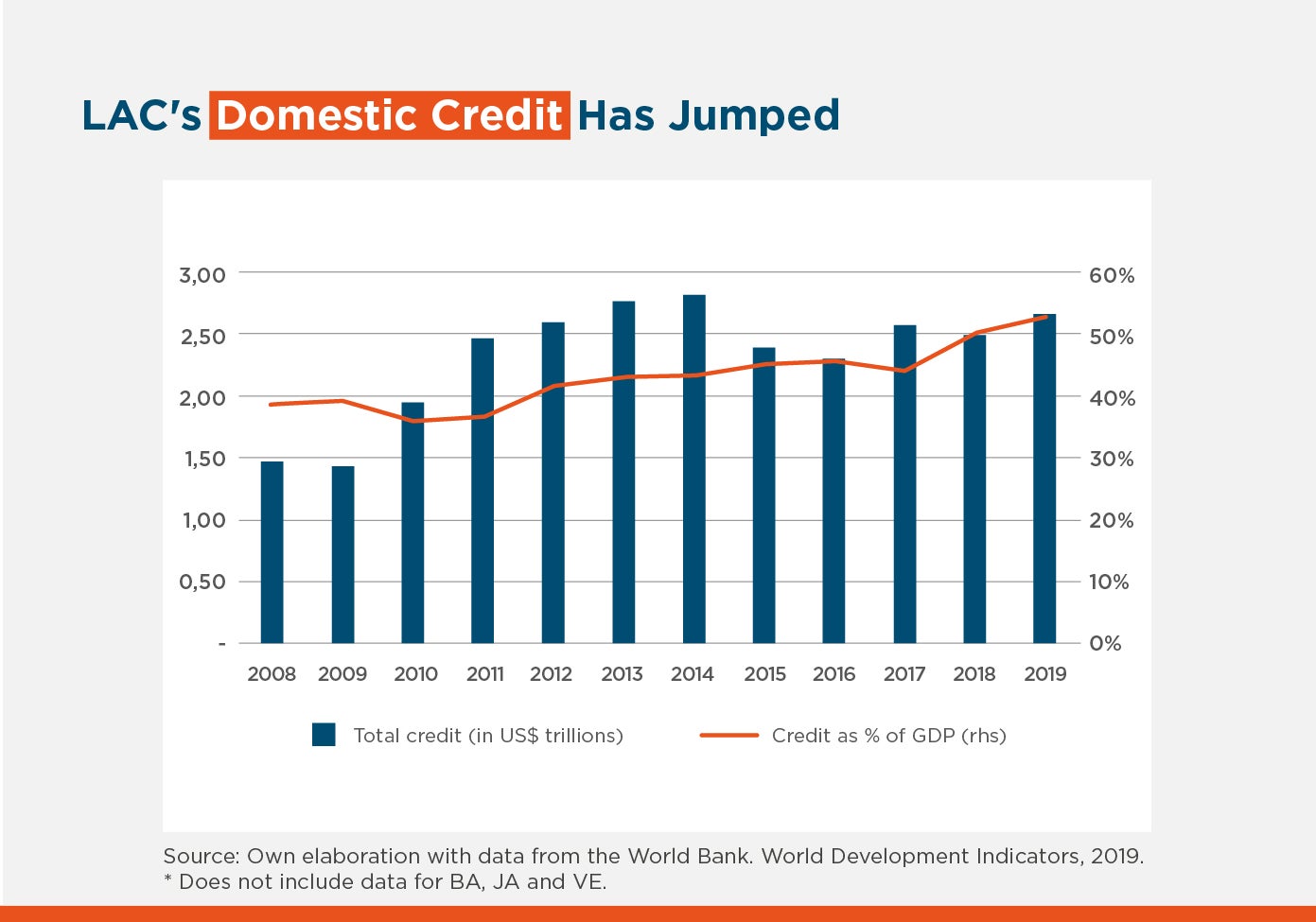 The compounded annual growth rate during this period was 5.6%, outperforming the annual GDP growth rate (1.5%) almost fourfold. Consequently, domestic credit to the private sector as a percentage of GDP has expanded from 39% in 2008 to 54% in 2019, highlighting the increased relevance of the financial sector in the region.

In addition to the expansion of credit, financial institutions have made improvements in credit assessment technologies, liquidity management and solvency. Most countries have adopted strict Basel recommendations and have strengthened regulation, supervision, and compliance. All financial systems in the region show acceptable capital adequacy ratios, and the 2019 regional average is approximately 1.7 percentage points higher than the 2008 average and more than double the minimum Basel recommendation of 8%. 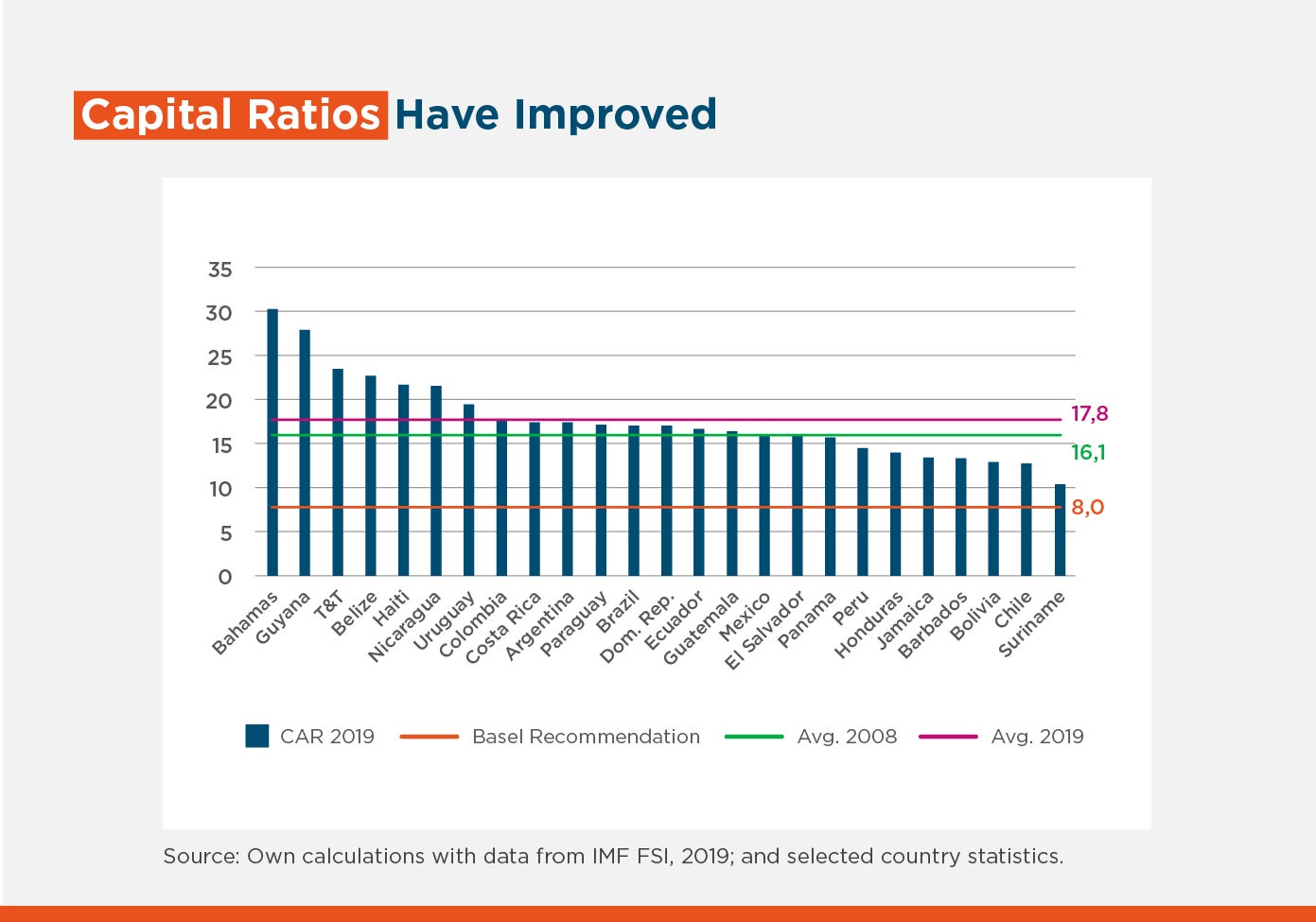 Moreover, average liquidity, measured as liquid assets – those that can be quickly turned into cash in situations of stress – as a percentage of short-term liabilities, was 74%, above the global average of 62%. Similarly, profitability indicators were adequate: average return on assets (ROA) was 1.97%, above the global average (1.76%); return on equity (ROE) stood at 16.3%, higher than the average for the rest of the world (15.0%).

Therefore, LAC’s financial soundness indicators underscored a good level of resiliency of the financial industry at the onset of the pandemic. However, it is difficult to predict the length and severity of the crisis, and its overall impact on the financial sector.

Public sector intervention has proven to be an essential part of the system’s resiliency so far. As we'll discuss in a follow-up post, most countries in the region and across the globe are implementing decisive targeted government policies to increase liquidity for financial institutions and maintain the flow of credit for businesses and households. That may be critical in stopping the current crisis from spreading to the financial sector.

Marcelo Paz is a Bolivian national who joined the IDB Group in 2008. He is currently a lead strategy officer, specialized in development diagnosis of