Green hydrogen can revolutionize the energy, manufacturing and transportation sectors in the region, making it a global hub of the so-called "energy vector of the future." However, some major challenges to its sustained deployment need to be taken into account.
Julián González Martínez
Fernando Cubillos
NOVEMBER 22 2022

In the context of the energy transition and decarbonization of the electricity generation matrices in the region, green hydrogen is positioning itself as a strategically important solution in Latin America and the Caribbean (LAC).

The key to this technology is how it can be applied at a cross-sectoral level, both in energy and in manufacturing and transportation, allowing the region to position itself as one of the global production hubs of the so-called "energy vector of the future." However, some major challenges to its sustained deployment need to be taken into account.

There are capability, institution, technology, market and financing challenges that must be addressed if LAC is to take the leap towards green hydrogen, taking advantage of its natural conditions. Let’s examine them one by one. 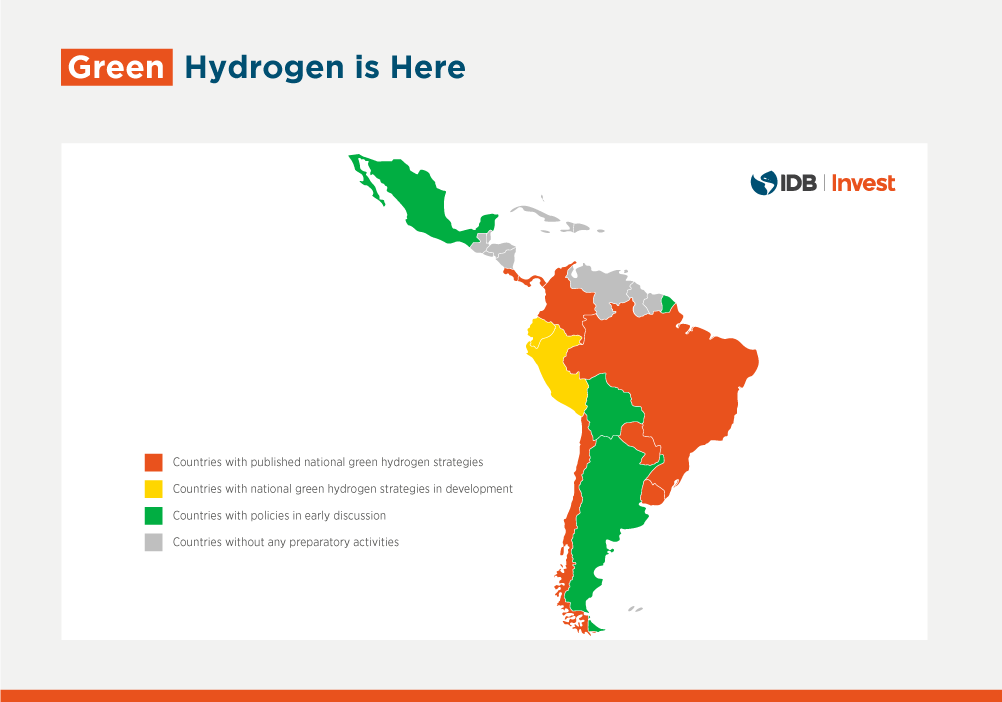 Government agencies, financial institutions and project developers should strengthen their technical capabilities (understanding technology solutions, their risks and value-creation potential), so that an articulated and mature project planning and execution ecosystem can be efficiently managed in alignment with each country’s energy plans and their decarbonization targets.

The number of green hydrogen projects based on renewable energy-based electrolysis can be as much as 50% of the total installed generation capacity in each country. For example, Chile seeks to have a 5 GW-electrolysis capacity by 2025, and 25 GW by 2030, and almost twice as much new renewable energy capacity following the 2:1 ratio. MW Developing and executing these infrastructure projects requires far greater efforts and new capabilities in the private and public sectors. Chile has been investing rapidly in renewable generation every year, with 1 GW during 2022. This will require a five-fold investment increase by 2030. Currently, Chile has a 10.4 GW-variable renewable (solar and wind) capacity.

Successful cases of commercial-scale (several MW) green hydrogen project development have demonstrated the importance of developing complete ecosystems (such as "hydrogen valleys") to have demand redundancy, while reducing technical and financial risks. Therefore, projects to be developed during the market maturity stage (2022-2030) should seek to integrate various buyers of the hydrogen produced in the planning and structuring phases. This will, in turn, help identify diverse revenue streams to reduce the investment risk. For this reason, the manufacturing areas are ideal candidates to develop ambitious commercial pilots.

Given the magnitude of the investments required for large green hydrogen projects, access to long-term capital becomes essential. These mechanisms should consider both direct equity investment and long-term financing. Hedging instruments will be important, preferably through concessional financing or hedges issued by green hydrogen importing countries and/or monetization of the externalities and environmental benefits resulting from these projects. Technical capacity-building programs in financial institutions and successful pilot projects will help to overcome this challenge.

The IDB Group, including IDB Invest, strongly believes that green hydrogen is one of the technologies that will help the region deliver on its climate change mitigation commitments.

Since 2018, the Group has been supporting the region in building capacity and setting favorable conditions for successful green hydrogen investments in the coming decades. Specifically, the IDB has helped several government agencies in Chile, Colombia, Uruguay and Costa Rica, among other countries, build their national hydrogen promotion roadmaps and create favorable market conditions.

IDB Invest is working with private companies (both foreign multinationals present in the region and national and multinational companies in the region) to build technical and analytical capabilities, identify opportunities for early technology adoption, and develop financial products tailored to their hydrogen projects.

In 2022, IDB Invest and IFC supported the Renewstable Barbados project developed by Hydrogène de France (HDF) and Rubis, consisting in the installation of a 50MW photovoltaic farm with green hydrogen and lithium-ion battery storage that will provide reliable and clean electricity to the Barbados grid. The institution is working with other power generation companies, gas transporters, and industrial and manufacturing facilities in the region to strengthen its green hydrogen project portfolio.

To achieve the region's climate goals, we believe that green hydrogen should be combined with other technologies to decarbonize the productive sectors, such as renewables, large-scale batteries, electric mobility, and carbon capture. As the IDB Group has stated that all its investments will be consistent with the Paris Agreement as of January 1, 2023, green hydrogen projects are expected to account for an increasingly larger share of investments in the region.