Welcome to the New Hydrogen Economy!

Green hydrogen is the new kid on the block in the renewable energy space. It’s generated through the split of hydrogen from oxygen in water using a renewable source (solar, wind energy or hydropower), causing no emissions from this process.
Alicia Taylor
AUGUST 19 2021

Hydrogen is the clean energy source that could help hasten the achievement of net-zero emissions. Green hydrogen, that is.

As the world seeks to recalibrate in terms of accountability to the citizenry and in favor of making more responsible environmental decisions to limit climate change, there is a global move towards implementing the ‘energy transition’ catalyzed by countries’ commitments under the Paris Agreement to reduce carbon emissions.

Many are familiar with wind and solar energy, but few know much about hydrogen. Or so they think! It may surprise you to learn that, in fact, you have known about ’grey hydrogen’ for a long time. It is produced using fossil fuels, including natural gas, releasing carbon into the atmosphere – almost all the hydrogen currently produced worldwide is ‘grey hydrogen’.

This is used in the chemical industry to make ammonia and fertilizer and for oil refining. After all, hydrogen itself is a non-toxic colorless gas and is the most abundant chemical element in nature.

The same green hydrogen can be obtained using waste heat. Waste heat is produced by a machine, or other process that uses energy: think of your laptop, and how it heats up sometimes. Waste heat is an abundant by-product of electrical generators or industrial processes, such as steel or glass production. The burning of transport fuels is also a major contributor.

One can also take municipal solid waste — the rubbish thrown away by homes and businesses — as well as plastics and hazardous medical waste and convert them into green hydrogen. 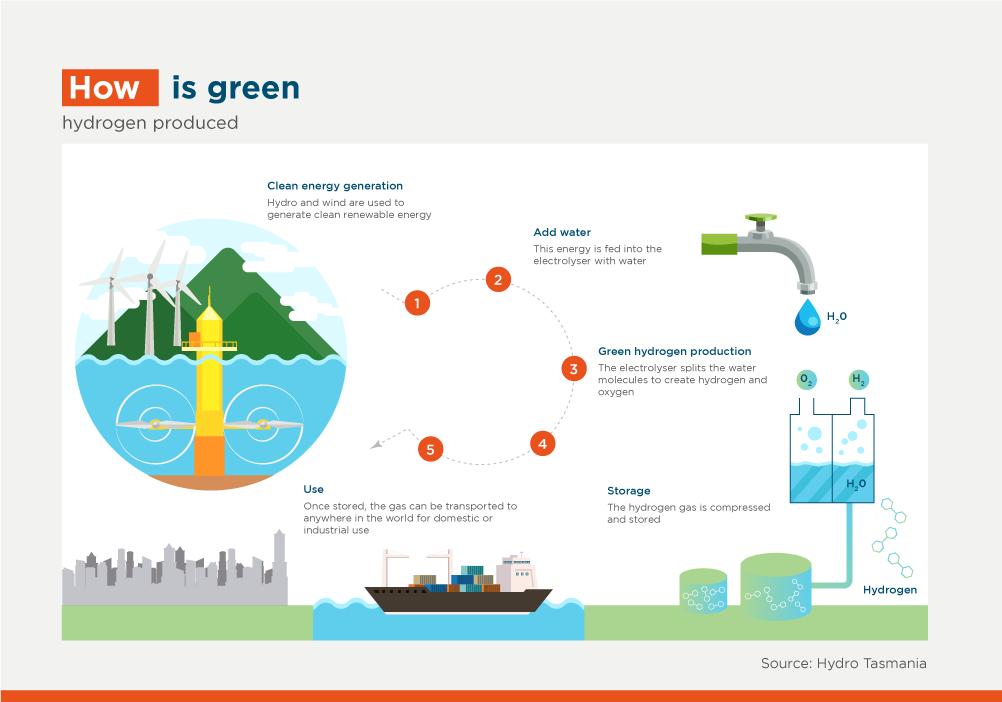 So, what’s the impact?

Green hydrogen is gaining momentum, and many believe that our future lies with it. When produced through electrolysis, it can be stored, transported and processed for a growing range of uses. It can be used to generate electricity.

Consider this: with wind and solar energy there will always be intermittency issues, and battery storage solutions are still considered to be expensive; with green hydrogen, intermittent renewable energy can be stored and transported and then used when needed. Of course, it’s also used as a feedstock to produce green ammonia and methanol

Industries such as steel, aviation and long-haul sea and road transport (trucks and rail) will benefit greatly from green hydrogen as there is no obvious alternative to achieve decarbonization. Its greatest advantage is that it burns clean, leaving only water vapor behind.

It can also be easily transported via gas pipelines in country and exported by ship and pipeline channels. In Trinidad and Tobago for example, we have a well-developed petrochemical sector and, as such, the existing infrastructure can expedite green hydrogen’s role in the energy transition.

At this stage, we’re still talking about a nascent industry, so the cost of green hydrogen relative to other energy substitutes such as wind or solar energy (with fast-declining prices in recent years), remains fairly high. However, many believe that the cost curve will come down just as solar and wind prices have. It’s just uncertain how soon.

Some experts expect it to be a multibillion-dollar export industry business. And there seems to be a race to be first to market globally. Trinidad and Tobago’s private sector, in conjunction with the national government, has been making progress. Chile’s government has approved its National Roadmap for Hydrogen Development and is launching a fund to support that effort. Other Latin American countries such as Brazil, Costa Rica, Colombia, etc are throwing their hat in the ring.

The question now is how to advance green hydrogen economies. Good policy-making is needed, as well as donor and/or government funding to help offset the high costs initially. Hydrogen studies are indeed requisite and, to that end, the IDB Group has been supporting. In-depth feasibility studies are also needed to ensure a project’s bankability. Scalability is a must.

In this regard, IDB Invest is a strategic partner in the advancement of the hydrogen economy in the Caribbean and Latin America, supporting private companies and government agencies. In addition to financing, IDB Invest offers technical and advisory assistance and can tap into donor funding where available to support such key projects.

If you haven’t been following the developments in the hydrogen market, believe me, this is one to watch!