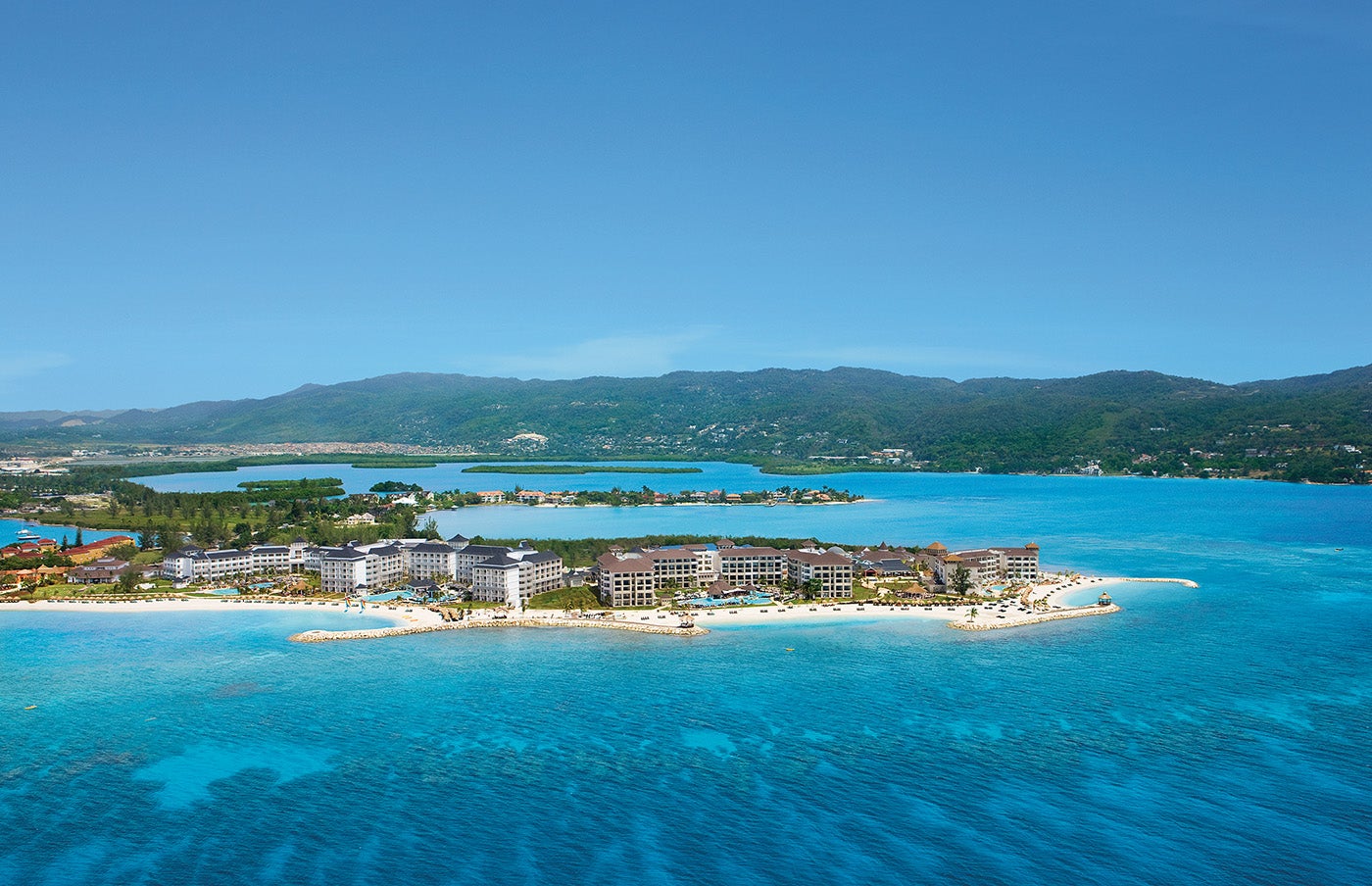 Seawind owns the hotel complex that includes the Secrets St. James (http://www.secretsresorts.com/st-james-montego-bay) and the Secrets Wild Orchid hotels (“Secrets Hotel”). This complex has a total of 700 guestrooms, restaurants, and recreation and shopping areas, including the beach and swimming pools, as well as infrastructure and support areas. Secrets Hotel, located on Montego Bay, Jamaica, is a first-rate, all-inclusive hotel that mainly targets the couples market. Seawind reports successful operations with a well-positioned brand and good occupancy rates since 2010. Seawind has operating and marketing agreements with the company AMResources of the Apple Leisure Group (http://www.appleleisuregroup.com) domiciled in the state of Pennsylvania, United States.

The Seawind project consists of (i) a 150-room expansion of the hotel complex under AMResorts’ Breathless brand, with new service areas and additional infrastructure, and (ii) the refinancing of existing debt with a debt profile that matches the expansion and projected cash flow generation of the hotel complex. The IIC loan will be an A Loan of up to US$15 million and a B Loan of up to US$68 million with funds from participating banks acceptable to Seawind and the IIC. This will be the IIC’s second loan to Seawind; the first was approved in 2012.

Jamaica is one of the main tourism destinations in the Caribbean and the tourism industry is one of the main foreign currency income generators for Jamaica. Through this loan, the IIC will be (i) helping expand tourism accommodations in Jamaica and their effect on foreign currency income generation; (ii) supporting job creation during both the construction and operation phases of the expansion and also in the supply chain of SMEs that provide food, beverages, and services for the hotel complex’s operations; and (iii) boosting foreign investment in Jamaica.

Environmental classification: This is a category B project according to the IIC’s Environmental and Social Sustainability Policy because it could produce certain effects that may be avoided or mitigated by following generally recognized performance standards, guidelines, or design criteria. The main environmental and labor considerations related to the Project are: efficient resource use and pollution prevention, workplace and labor conditions, community health and safety, biodiversity conservation, and sustainable management of living natural resources.

Seawind owns the Secrets St. James and Secrets Wild Orchid hotels—two adjacent buildings, each with 350 rooms, and offering a different tourism concept. They are located on one of the best beaches on Montego Bay, Jamaica, and are operated by AMResorts. The project consists of building a Breathless brand hotel with 150 rooms. The hotel will target the high-end market, offering an ambience and entertainment package that is geared toward adults.

The expansion will be located on a site adjacent to the current hotels, separated by a public thoroughfare. The sites will be linked by a pedestrian footbridge that will allow guests at the Breathless hotel to take advantage of the facilities—including restaurants, swimming pools, and beach access—at the current hotels as well as having exclusive access to Breathless’ amenities.

The Secrets St. James and Secrets Wild Orchid hotels have implemented an Environmental Management Plan. They both also meet Rainforest Alliance’s 2012 Tourism Certification Standard, which assesses the hotel’s handling of environmental, sociocultural, and business matters. For the proposed expansion, Seawind retained the services of CL Environmental Consultants Co. Ltd., which conducted a technical study on the main environmental impacts and made recommendations on mitigation measures. Based on this study, Seawind obtained the construction permits for the project from the National Environmental and Planning Agency and the National Work Agency.

Protection of natural habitats: The current hotels and the site of the planned hotel are located on land that was reclaimed from the sea in the 1960s as a result of the dredging of the port of Montego Bay; thus, it was not originally a natural environment. Over the years, however, natural flora and fauna have appeared, and today the site is considered a natural habitat for various species of fish, turtles, invertebrates, coral, and plants. The entire coastline of the hotel complex is part of the Montego Bay Marine Park, considered a sanctuary for some aquatic animal and plant species.

The shoreline at the site where the Breathless hotel would be constructed is covered by mangroves, which provide shelter and are a source of food for several kinds of fish and other marine life, including mollusks and other invertebrates, as well as plants, birds, and amphibians. The mangroves are protected under Jamaican law. According to the project plans, the hotel will be set back from the shoreline so as to not affect the mangroves. A floating restaurant with a view will also be built. This restaurant would be accessed via a walkway with a minimal impact on the mangroves. During the construction phase of the floating restaurant, the walkway supports will be installed with a focus on minimizing damage to plants, especially young, developing specimens; prop roots; and pneumatophores. The floating platforms will be held in place by vertical posts that allow the platforms to move with the tide and prevent any horizontal movements. Lighting will be designed so as to not disturb marine life, especially any turtles in search of nesting locations.

Liquid effluent management: The hotel rooms have a dual water supply and liquid effluent drainage system, which allows effluents to be classified according to their origin, facilitates more efficient effluent management, and saves water. There are three categories of effluent water. The first category is gray waters: the wastewater from guestroom showers, which is combined with wastewater from the swimming pools. Gray waters are stored in a tank and then treated by filtration and chlorination for reuse in flushing toilets. The second category is sewage from the toilets that is channeled to the public sanitation network and treated at the plant of the National Water Commission, a State enterprise. The third category is rainwater, some of which is captured and stored in a tank for use as a reserve for firefighting and for irrigation. Excess rainwater filters through the soil and returns to the sea gradually. The hotels also use seawater to cool its refrigeration systems. The temperature at which water is returned to the sea is controlled, with a maximum allowable thermal increase of 2.5 degrees Celsius. This system will be complemented by a system of cooling towers that will result in considerable power savings by lowering condensation temperatures and preventing the overheating of the water from the seawater wells. The same standards will be used when building the new facilities.

Solid and semisolid waste management: The waste management plan at Seawind focuses on preventing or reducing waste generation as well as on reusing, recycling, and recovering waste; final disposal is the last resort. The green waste from parks and gardens and some organic waste from kitchens is turned into compost, which can be used as a natural fertilizer. Seawind’s procurement policy strives to select inputs that minimize waste generation or that enable waste recovery or recycling. The final disposal of domestic waste is carried out through an authorized third-party provider. CL Environmental Consultants developed a waste management plan for the construction phase of the expansion.

Handling of hazardous materials: The existing hotel complex has two 8,000-gallon tanks for diesel fuel, which is used for emergency electric generators. It is also used for the emergency fire pump. The tanks are surrounded by a spill-containment wall capable of holding one and a half times the total volume of fuel. The tanks, in turn, are double-walled with a leak detector between the walls. There are also four 2,000-gallon tanks of liquefied petroleum gas for use in the boilers, stoves, and the hotel laundry’s clothes dryers. The tanks have an independent circuit of sprinklers to fight fires. A third-party maintenance service removes the spent lubricants from the generator and fire pump motors.

The increased capacity resulting from the construction of the new hotel is not expected to materially increase the storage capacity needed for such products, but if that were the case, the same security standards used thus far would be maintained.

Water and energy conservation measures: The hotels and their amenities were designed to achieve maximum water and energy savings. As noted above, the hotel’s water supply system permits the reuse of a significant portion of the water sourced from the public system and the use a portion of the rainwater captured. Centralized control of air conditioning significantly reduces the need for cooling when guests leave their rooms or windows are left open, resulting in substantial savings in electricity consumption.

The boilers produce hot water at two different temperatures, one suitable for the needs of the guests, and the other, higher temperature for the laundry. This saves energy in distribution, since there is no need to heat all the water to the higher temperature. The hotel has an array of photovoltaic panels to preheat the boiler water that have resulted in substantial energy savings. It also has a system to continuously monitor consumption of electricity, drinking water, and liquefied petroleum gas that is controlled by the site engineer. This system makes it possible to manage energy more efficiently through the generation of consumption reports and the establishment of consumption alarms.

Personal safety and emergency response: The complex has a firefighting system consisting of pressurized pipes and a distribution ring with hoses and hydrants. It also has a network of portable fire extinguishers. There are thermal fire detectors in the kitchens, optical fire detectors in the rooms, and gas leak detectors in the laundry and kitchens. The fire detectors and manual alarms are connected to the switchboard, which is always manned. The security systems have an independent electrical backup system. There is a fire brigade, and drills are conducted on a regular basis. The hotel expansion will include security systems with the same technology and quality, as well as an automated sprinkler system throughout the building.

In 2015, Seawind updated its emergency response manual to cover the new facilities. In this manual, the range of risks is extended to cover hurricanes, earthquakes, floods, fires, spillages, bomb threats, riots, terrorism, theft and robbery, hostage-taking, kidnapping, medical emergencies, accidents, and service interruptions. It details the procedures, chain of command, the communications system, and the evacuation plans.

Labor practices: Seawind is in compliance with domestic labor laws and International Labour Organization (ILO) standards. These mandatory core labor standards include legally-mandated benefits, freedom of association, organization of workers unions, and nondiscrimination in the workplace. Company personnel are not members of any union. All full-time employees have health, life, and workplace accident insurance. Medical services are provided through the national social security system, and employees may obtain coverage for their immediate family at a reduced cost.

Social issues: Seawind Key Investment Limited is a member of the Spanish American Foundation, comprised of Spanish companies located in Jamaica. The Ambassador of Spain to Jamaica is the president of the foundation, which provides funding for different initiatives of interest to the community throughout the island. Seawind has community programs of its own in the Montego Bay area, supporting schools and daycare centers and implementing programs staffed on a volunteer basis by company employees.

Monitoring and reporting: Seawind has an Environmental Management Plan for its hotels and has developed a plan specifically for the construction phase, which was submitted to the local environmental authorities for their approval, in keeping with the requirements to obtain a construction permit. Seawind shall prepare an Environmental and Social Action Plan (ESAP) satisfactory to the IIC to ensure compliance with domestic regulations and the IIC’s environmental and workplace safety and health guidelines, both during the construction phase and the operating of the new hotel. The ESAP shall provide for an annual report on environmental monitoring and conservation, training programs in health, occupational safety, and emergency response, and accidents.

For inquiries, comments and requests about the project